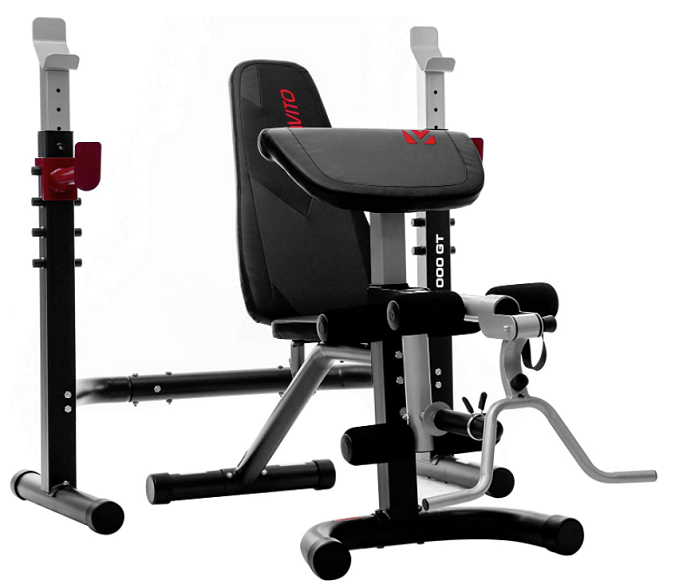 It is rare to see an Olympic Bench with this much enthusiastic feedback in the comments, though the TX1000 two-piece barbell and squat setup from Viavito does just that.

You get an adjustable bench, squat rack with spotter-catchers built in and a preacher curl pad. When you compare the setup with the price, it simply screams good deal. With the reputation of Viavito, and solid build (albeit with some lumpy welds), this Olympic bench is a bargain. You even get a plastic adapter for your 1-inch weights.

Check out the zoomable gallery for the details along with the latest price now – over on this dedicated Viavito Olympic barbell weight bench product page. 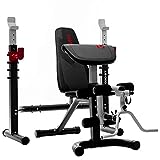 This bench setup has an impressive weight capacity. This is 573lbs, including the user. When you see the sturdy frame, you will wonder whether this is on the light side.

Viavito built this weight bench to work with 7 foot (213cm) Olympic barbells. Small touches include non-skid feel and plenty of padding for the bench seat and the roll leg developer.

You will need to assemble your bench – though this is well within the capabilities of anyone that has been working out for a while.

Viavito have solved the safety element of their squat rack by building in spotter-catchers. These give you peace of mind, with the adjustable bars giving you plenty of height for your Olympic bar. The range is 119cm to 160cm, with nine bar rest positions in between. 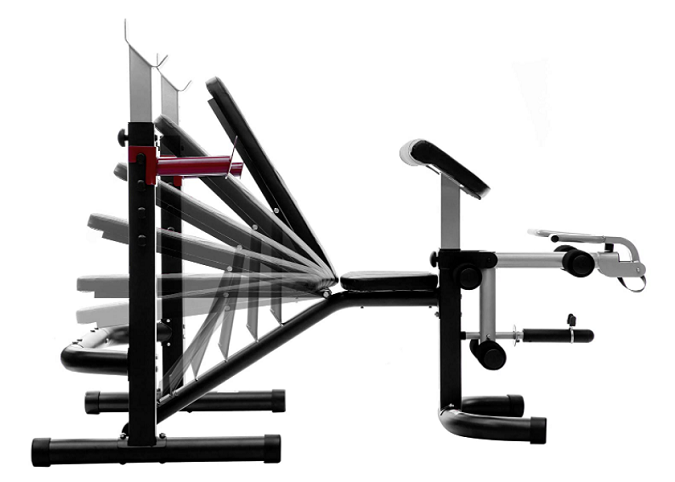 The bench is super-versatile. Unlike those ‘no name’ imports, this one has six separate positions including two with decline. As you can see from the pictures, the wide and solid bars give you complete support whichever setting you choose.

No escaping leg day with this setup. At the front is a padded leg roll, with a pole to attach your weights. Add in the pad for preacher curls and yoke bar, and you can cover a lot of muscle groups with this simple setup. Padding (which is up to 1.9cm thick) will keep you comfortable while you train.

Feedback: What Users of the TX1000 Olympic Weight Bench Setup from Viavito Said?

The word ‘solid’ came up over and over. Some buyers wrote that they could not believe the quality for the price point. The only negatives I could find involved assembly (that always gets a few people) and the ugliness of some weld spots.

The Q&A section at amazon does highlight that you would need to take this bench apart if you want to store it away. I can’t see that being a huge problem, though something to keep in mind.

As always, make sure you keep an eye on the feedback whatever bench you end up with. Look out for service issues, as those are a red flag (more for the no-name brands than with Viavito to be fair).

Wrapping Up: Is the Viavito TX1000 Olympic Weight Bench Any Good?

You get a lot more than a simple Olympic barbell bench with this model. When you include the extendible squat rack, leg press setup and preacher curl pad – a lot of different muscle groups are covered.

Compared to many benches, you get a tough, solid frame. The seat has six positions (two are decline) and the rack has nine levels. Weights or bars are not included – you need to get them separately.

Overall, this bench has excellent feedback.

For an all-in-one solution for training at home, the Viavito TX1000 is just the job.

See the zoomable pictures of the different parts and check the latest price now, over on the TX1000 dedicated product page at amazon.co.uk