My first rower was from JLL, and I was excited to see the bigger spec of their Ventus 3 Air Rowing Machine.

JLL are British, with local service and engineers. We also know their equipment is excellent quality – especially for the mid-range price tags. With the Ventus 3, you get several advantages over their previous rowing machines. The standout is a mix of air and magnetic resistance. There is also a double rail, and compatibility with the hugely popular KinoMap app.

JLL make things easy by showing a chart comparing their five rowing machine models. The Ventus 3 works brilliantly for anyone that already loves rowing at home.

Check out the latest price and see the impressive full picture gallery for yourself now – on this dedicated Ventus 3 page at the JLL amazon.co.uk store. 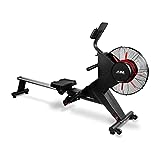 Unlike the R200, the Ventus 3 does not fold. While standard for better quality / more robust rowers, you should check out some folding alternatives if you are short on space.

This model is over 2 meters long, and has wide, bars with adjustable feet to ensure you stay stable while you row. It is compliant with CE and EV957 specs and works for users up to 120kgs. This unit weighs 33.8kgs and is just under 2.2 meters long when assembled. With a tough aluminium construction, the Ventus 3 is certainly built to last.

A small but important detail involves the wheels at the front. You can lift the back and wheel this rower around easily.

What stands out for the Ventus 3 rowing machine is the resistance. You get two forms of resistance that work together. As you will see from the picture, JLL have incorporated air resistance for a super-smooth and predictable row. When you want to up the resistance, there are sixteen levels of electromagnetic resistance to choose from.

This allows plenty of scope for this model to stay with you as your fitness level improves. 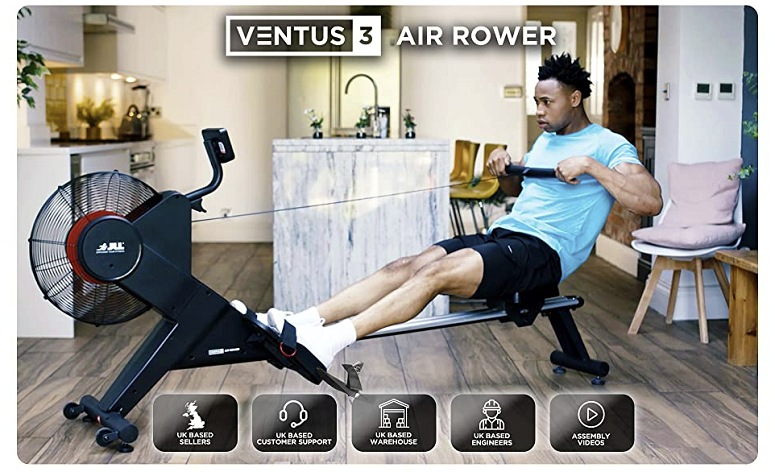 KinoMap is a hugely popular fitness app among rowers. You can use this via your own phone or iPad, using the built-in holder.

A plus point for the Ventus 3 is that you can use it fully with just the built-in LCD console. This looks basic, though offers all the key stats to track your rowing session. Time, calories, strokes, distance, strokes per minute, pulse rate, total strokes and watts are all shown.

A heart rate band is included – as are the batteries for the console.

Feedback: What Users of the JLL Ventus 3 Rower Said?

One user had a cracked iPad after knocking it out of the holder accidentally. This is unfortunate (I have had it happen with a phone!), though the one-star review is more therapy than useful for potential buyers… sounds like the kind of person that blames crashing into the back of another car on that car having a bad driver to me.

Overall, the feedback is positive. Many other models in the JLL range follow the pattern. Quality is mentioned, a few people grumble as they need to assemble things, and JLL’s excellent customer service gets some praise.

What stood out with the feedback at different retail outlets is that positive reviews came from people that had tried other rowers first – then bought a Ventus 3.

Wrapping Up: Are Ventus 3 Rowing Machines from JLL Any Good?

The combination of air and magnetic resistance with a solid build is a great starting point for the Ventus 3 rowers.

For me, the overall spec is close to the ‘big brand’ models from NordicTrack or Proform, at a lower price point. When you add the reputation of JLL for great service (and British service centres), you get a lot more peace of mind than with any no-name imported brands.

You don’t get a built-in colour monitor with this model. While that is solved easily with your own phone or tablet, I can see it being a minus point for some people.

For the price, this is an excellent model.

Check out the full gallery, plus the comparison chart with the five models now – over on this dedicated Ventus 3 page at the amazon.co.uk JLL store.