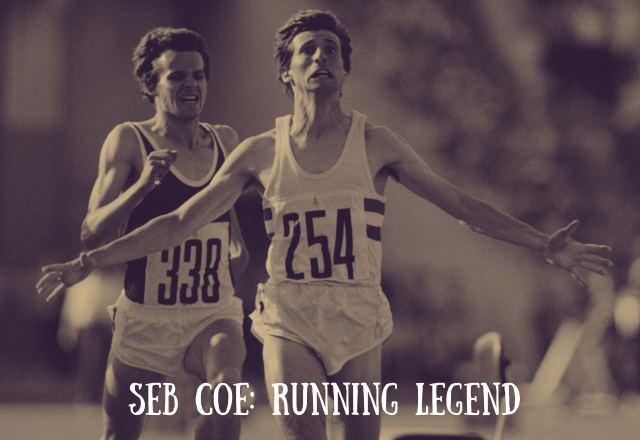 Today, Sebastian, or Seb Coe as he is commonly known, is the President of World Athletics. A role he has had since August 2015. Go back four decades and the British athlete was dominating the track. He set multiple world records, claiming Olympic gold medals and being one half of one of the greatest rivalries in sport alongside Steve Ovett.

In 2012, Coe was pivotal in bringing the Olympic games to London. This was one of the greatest modern games in the history of the event. Here’s a look at the varied career of Sebastian Coe.

The first time that Seb Coe made headlines as an athlete was at the 1977 European Indoor Championships, claiming gold, running from the front throughout and narrowly missing out on the world record. This was a true indicator of what was to come.

The following year, Coe would compete in the European Championships in Prague. He lined up alongside Steve Ovett. The winner of the race was German Olaf Beyer, with Ovett finishing second and Coe in third. In the race Ovett broke Coe’s UK record for the distance, and the rivalry had begun.

In 1979 Coe went on an incredible run of breaking world records. He claimed the records for the 800m, 1500m and the mile within the space of 41 days becoming the first person in history to hold all three records at the same time.

The following year saw the Moscow Olympics come around; an event famously boycotted by athletes from the US. Both Coe and Ovett were heavily favoured to succeed. Seb Coe was expected to land the 800m event and Ovett expected to succeed in the 1500m. However, sport being sport, this didn’t exactly go to plan. The 800m came first and Ovett unexpectedly claimed the gold, with Coe later claiming that it was ‘the worst tactical race of my life’.

Coe vs Ovett: The Rematch

A few days later both Coe and Ovett lined up in the 1500m final (a young Steve Cram also qualified for this final, finishing 8th of the 9 competitors). Ovett was unbeaten in the 1500m or the mile for 45 races and three years, so was heavy favourite to claim the double gold. However, Coe had different ideas, covering the last 400m in an incredible 52.2 seconds to claim the gold medal, Ovett eventually beaten into third.

In 1981 Coe and Ovett traded world records in the 1500m. Coe would claim it in Zurich, Ovett would better Coe’s time in Koblenz, only for Coe to reclaim it in Brussels.

The 1984 Olympics took place in Los Angeles. Once again, Coe would take silver in the 800m race, this time behind Brazilian Joaquim Cruz. Just like in Moscow, Coe would step it up in the 1500m race, claiming gold, this time edging out fellow Brit and current World Champion Steve Cram. The 1984 Olympics were disappointing for Ovett, who suffered from respiratory problems at the event, finishing last in the 800m and failing to finish the 1500m.

In 1986, Coe would win a gold medal at the 800m in the European Championships, amazingly his only gold medal in that discipline at an international event.

Coe continued to compete from 1987 to 1989 – but couldn’t achieve the success he had earlier in his career, failing to be selected for the 1988 Olympics. He retired from competitive athletics in early 1990.

In 1992, Coe was elected as a conservative member of the UK Parliament for the Falmouth and Cambourne seat, narrowly edging out both the Liberal Democrat and Labour candidates (perhaps surprisingly, Steve Ovett wasn’t part of this contest). He would lose the seat at the 1997 general election but was offered a life peerage in 2000.

Now Lord Coe, he became heavily involved in the London 2012 Olympic bid. At first, he was an ambassador for the bid, but then became chairman after the 2004 resignation of Barbara Cassani. Coe’s presentation in front of the International Olympic Committee just before the deciding vote was said to be critical. A short time later, London was announced as the host city for 2012, edging out long-term favourites Paris.

Following the great success of the Olympic Games in 2012, Coe would be announced as chairmen of the British Olympic Association.

In 2015, Coe stood for election for the role of President of the International Association of Athletics Federations, having already been vice-president for a number of years. The final vote was between Coe and pole-vaulting legend Sergey Bubka, with Coe winning out by 115 votes to 92.